Building the Dome - The Beginning - 1

Newly married in 1972, living in a rental duplex in a subdivision, Bob and I longed for a place of our own, out in the country, a place to raise our son and have a few animals. Bob's dad offered to help us find one. It was Doyle's goal that all four of his children own their own homes, free and clear, by the end of his life and he achieved that goal when he died in 2000, but this was 1972 and we were just getting started. 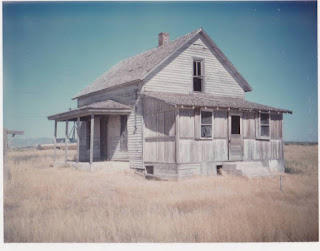 Soon enough, Doyle learned of a place along Colorado Highway 1, halfway between Fort Collins and Wellington, about five acres of land with an old house, barn, silo, granery, and chicken house on site. It was abandoned and stood empty for years, most recently used as a migrant workers shack for the families who worked the nearby fields. The owners, Mr. and Mrs. Felix Martinez were hoping to sell the place to someone who would tear down the buildings and build a new house on the property located on the far western edge of their own place, buildings Mrs. Martinez considered an eyesore.

Doyle knew a good deal when he saw it, liked the way the house set up high with good drainage back from the road a ways. From his childhood in northwestern Arkansas he knew the flood danger of locating a house in a low spot or valley, no matter how picturesque. 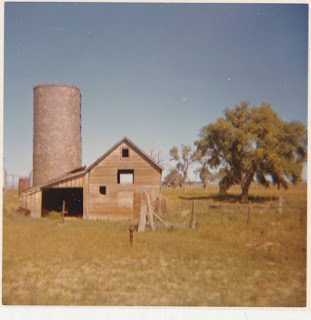 He quickly signed the papers and had a contract before the place came on the open market. Later, several people told us that if they had known it was for sale they would have scooped it up. Thank you, Doyle, for your quick action. He soon paid off the Martinezes and signed a contract with us but delayed payments until we got the house built. By the way, when the place was surveyed it came up only 2.98 acres, not 5, but there was no point in quibbling about that. What you see is what you get when buying land. 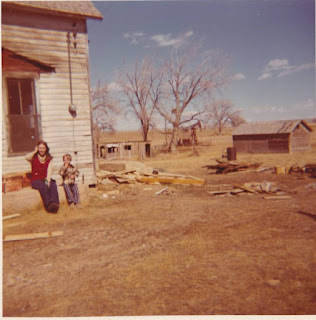 Thus began our love affair with building the dome. Bob might not describe it "a love affair" as he did all the design and construction himself with help from many of his friends, on a tight budget while holding down a full time job. But from my perspective, we launched into a project that was to define our lifestyle, "building our own home."

At first we continued to live in the duplex and work on the place evenings and weekends but Bob's younger sister drove by one day and spotted a couple of guys removing barnwood from our barn out back of the house. That convinced us we needed to move on to the property as soon as possible. We bought a new 14' x 53' mobile home and placed it just east of the old house, hooked it up to electricity and gas, moved in on Halloween Day 1972. No water connected yet, but we moved in! 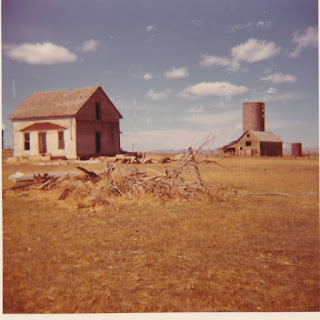 Backing up just a bit I want to tell about those first few months, before we moved on to the property, the work Bob did and the changes we made. There were two small additions that had been made to the original 20' x 24' story-and-a-half house, shed style rooms, one on the east that served as a kitchen and one on the north, a bedroom. There was also a porch along the south side. Bob decided to tear them off and keep only the main house. Yes, we went against Mrs. Martinez's wishes and kept the old house. It had so much history! And I loved the wood floors, fir planks, not oak.

One day while he was removing the roof of the north room Bob uncovered a nest of newly hatched hawks, small sparrow hawks. He quickly protected the nest from the elements and stopped work on the house for the day, hoping the parent hawk would take care of the situation. 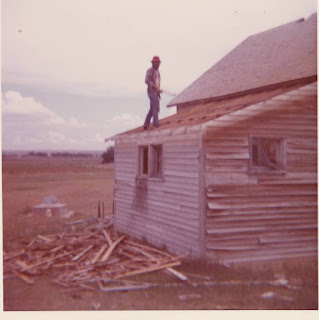 However, when he returned the next day the babies had fallen into a space in the exposed wall so he had to retrieve them. We brought them home to the duplex and attempted to raise them ourselves. Bob diligently shot doves and chopped up the breast meat to feed the baby hawks and at first they seemed to thrive, eating heartily each time he showed up with fresh meat. But soon we realized their legs were not strong, they wobbled instead of walked. Because it is illegal to raise hawks without a permit (as it should be) we didn't take them to a veterinarian. Instead, we enlisted the advice of a young man who was a wildlife biology major at CSU. He knew right away that our hawks had rickets and explained that we should have fed them the entire dove, guts, bones, feathers and all, just like their parent would have done, that by selecting just the breast meat we had deprived them of the necessary vitamins and minerals for bone formation. Our little hawks didn't make it but we learned a lifelong lesson, painful though it was. 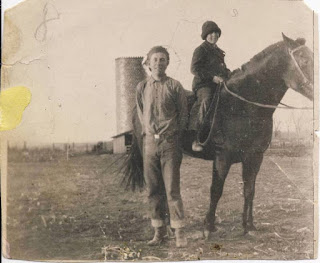 Long before the new construction could begin, the removal of those two additions, the concrete porch, and the plaster and lath on the inside would occupy Bob's efforts for months. Inside those old walls were few treasures, mostly dead mice. However, one day he came home with a small photograph he had found inside an upstairs wall. It showed a young man on a horse with another young man standing beside them. Our barn and silo were in the background. On the back of the photo was scribbled "Billy and Jack Schwartz". It took years for me to figure out who Billy and Jack Schwartz were (no Google back then) but I now know they were renters who lived here for a short while and still have family in Fort Collins. I love old photographs so this found treasure was better than a piece of jewelry. 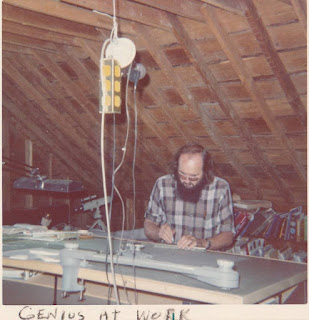 By the time we moved into the new trailer house in October of 1972 there was a huge pile of old lumber and plaster forming on the west side of the house and Bob was spending his nights designing our new home while incorporating the old one in his designs. I'm not sure when it was he settled on his final plan, to build a geodesic dome, but that's what he did. The photo on the left was taken by my dad (and labelled by him too) and shows Bob at his drawing board up in the upper level of the old house.