Building the Dome - Design and Foundation - 2 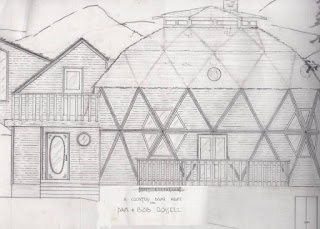 I remember one of the designs Bob came up with for the remodel of our newly purchased old farm house. His plan was to use the existing 24' x 20' story-and-a-half building as the central core, then add a 12' single story "skirt" around all sides. That would have given us a ranch style home with a tall, central, open great room. Now that I don't climb stairs very easily that idea has its appeal but when we think of giving up living in a dome we're both glad he moved on from that plan and decided to build a dome onto the existing house. 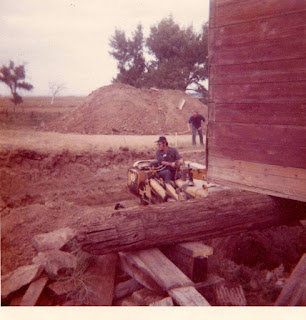 At this time in our lives we were both working for the same lumber and manufactured home builder, Union Manufacturing, a company owned by Robert Everitt. Bob was an architectural draftsman and I was a receptionist. Bob discussed his plans to remodel an old farm house with his friends and co-workers and one day he and Mike Jones created a model of a geodesic dome out of balsa wood and hot glue on our kitchen table, the first concrete steps toward moving forward with that design. Domes were popular in the Pacific Northwest, inexpensive to build, fast to put up, and non-traditional, kinda Buckminster Fuller funky. 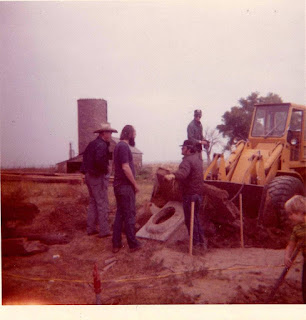 In fact, we would not have been given a loan by a local lending institution to build a dome for they were not considered a good investment. Thankfully, Doyle was willing to be our banker. I think he liked having bragging rights for his involvement in such an unconventional house. 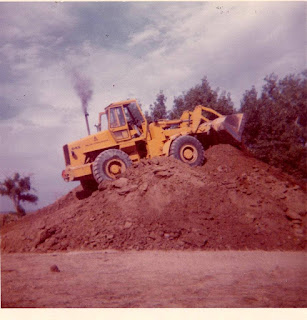 The existing house had no foundation under it. Someone had dug a hole beneath it and we found jars of canned goods there but no footings, just stones at the corners. So before any new construction could begin the house had to be blocked up and a foundation put beneath it. 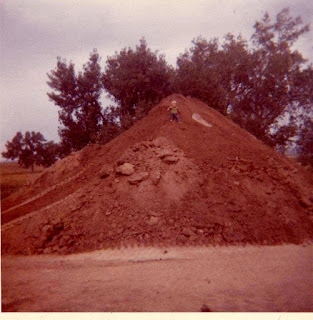 One day, while Bob and I were at work, Doyle and Frances came down to our place hauling long wooden beams, 20"x20"x32' long, which they managed to insert beneath the house as support. We did not know they planned to do this and were shocked they managed to do it alone. We came home to find two well-place heavy beams supporting our house and ready for the excavator to dig the basement. Never again would I underestimate the ingenuity of those "old folks".

It was probably late 1973 or early 1974 when Lee Tucker and his sons came over with a front end loader and later Mr. Beckstead arrived with a crawler tractor. Between the two of them they dug a full basement under the house and excavated an area to the north and east which became the basement for the soon to be built dome. 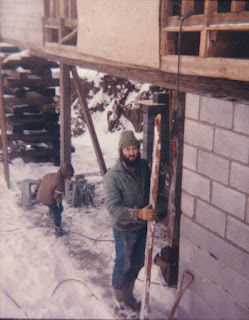 The dirt they removed, subsoil of heavy clay, was placed in a big pile north of the house. By the time they finished the excavation that hill was huge! We used a little of it for backfill against the foundation but most of it remained a barren hill. Time, wind, and weathering has reduced it to a flattop mound of much less height where we grow vegetables and flowers these days. 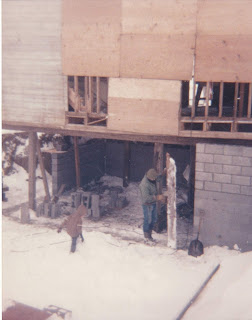 As the basement was being excavated Bob built cribbing to support the north end of the house with broken railroad ties. Winter was upon us and that was cold, miserable work. The following spring he rented a rototilller to remove the hard-packed clay those tractors had compressed and formed up the footings for the house and the dome. He mixed the concrete, poured the footings, stripped them, and contracted with Lloyd Vlcek to lay the concrete block walls beneath the rectangular house and the round dome walls. They made a trade. Bob drew up the house plans for Lloyd and Sandy's new home in exchange for Lloyd laying our block. That wasn't the only trade Bob made but it was one of the most crucial and Lloyd's fine skills were and still are much appreciated. 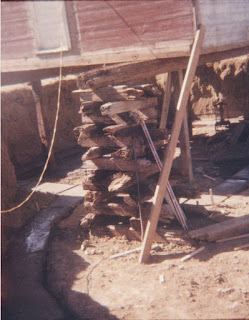 I've lost track of time as to when the block was layed and when the dome construction started. While this was going on we were working forty-hour weeks at Union Manufacturing, raising our son, partying with our friends, celebrating birthdays and holidays with Frances and Doyle, living our lives. 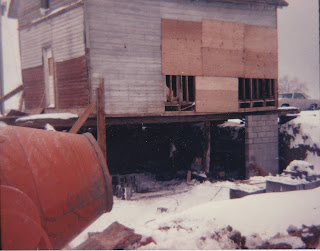 Bob worked on the house when he could, bartering for electrical, plumbing, scrounging lumber, building on the cheap. Our enthusiasm ran high and Bob's youth and conditioning from his UDT Navy days served him well. 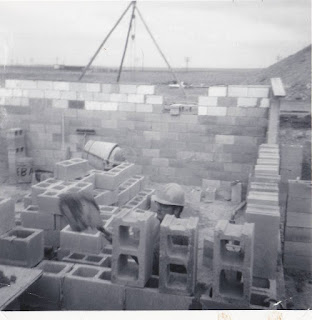 After reading and studying Domebook 1 and Domebook 2, three dollar books in the early 70s, both collectors items now, and pouring over tables and charts about struts, angles, and connectors, Bob settled on a design. He would build a 5/8 sphere, 3-frequency geodesic dome about 40' in diameter and 24' in height. He designed 2x6 fir walls with steel hubs and bolt connectors. Instead of covering the dome with plywood he opted for 1x6 pine lumber. 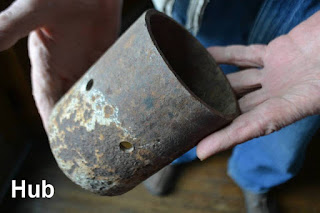 And, the biggest challenge of all resulted from his decision to attach the dome to the old house in such a way as to insert the house into the integrity of the sphere. By the way, I've told this out of order for he had to settle on a dome design and size before he could put in the footings and have Lloyd lay the block walls. Oh, and before he could build the dome he had to put in a floor to set it on.
Only now, in looking back on that time, do I realize what a huge undertaking this was for Bob. I am so proud of him for carrying through with this amazing home he created which we've loved living in these forty-some years.