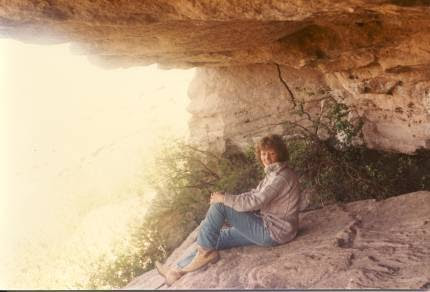 There is a place in northeastern called Pawnee National Grasslands, a sparsely populated, nearly treeless flat plain relieved only by the statuesque Pawnee Buttes, two towers of stone that never eroded as wind and water carved away the land around them. Windswept and arid this part of was once home to settlers who starved out and moved on leaving the land to birds and small mammals, and to the relentless wind.


Frances Smith Russell grew up on the edge of the grasslands in the tiny community of , and after I married her son Bob she took me out to see what was left of her childhood home. After much fruitless searching, driving back and forth along the county roads she knew so well we saw shiny reflections of the sun out on the empty prairie and walked over to the site. There were “treasures” there, fifty years after the family gave up on farming and moved to . A small galvanized bucket, dented, holey, and useless, but we could see it had once been used to feed a calf for the rubber nipple was still attached. And we found a brass suspender button from an old pair of men’s overalls. My favorite of the few treasures we found was the remains of a once beautiful yellow and white enamelware bowl, now rusted and missing its bottom. My mother-in-law never stopped talking the whole time we were there, reminiscing about her life out there, about the family, the neighbors, the hardship. I believe that is when I fell in love with those empty plains of eastern .


When I first moved out to from in July of 1970 I was crazy about the mountains and spent my free time, when I wasn’t looking for a job, up where the splashes across the rock strewn canyon floor. I had dreams of owning a little place up that canyon or maybe up the Buckhorn, but definitely in the mountains. The plains didn’t interest me at all. Then in 1972 I married Bob Russell and he began to indoctrinate me on how “the mountains are for tourists” and the plains are where his heart lay. Then took me over east and told me about her life there. Soon I found myself reading books about the eastern plains, wonderful books like Nell Brown Propst’s “Forgotten People – A History of the South Platte Trail.” When James Michener published “Centennial” in 1974 we went up to Laramie, Wyoming to meet him and participate in a costume party which was part of the rollout out of a new library in Centennial, Wyoming. We loved that book! Then we read the book about how he wrote Centennial and loved it too. Bob and I began to fantasize about retiring in Grover, , our idea of heaven on earth (at that time in our busy lives), wide open spaces, no people, no pressures.


I worked with a woman who grew up on a small farm in the northeast corner of and who loved that prairie land and its history. She was adopted by an older couple from when she was an infant and as an adult tried to find her biological parents. She came to believe she was related to the Iliff family, a prosperous ranching family who came in to eastern in the late 1800s. One summer day she and I made a day trip over east to explore and imagine what life was like when John Wesley Iliff’s line camps dotted the prairie. She had permission to open gates and cross privately-owned pastures as long as she diligently closed the gates behind us.


That day was extraordinary for me. We hiked across open land to the site of an old line camp where we discovered a crumbling stone spring house straddling a trickle of cold water bubbling up from the ground. We drove to the base of the Pawnee Buttes but decided not to try to climb three hundred feet of steep rocky walls to the top. But from that vantage point we saw many birds’ nests in stony outcrops near the summit and larger birds circling the peaks. We stumbled upon an overhang of sandstone which provided relief from the sun and protection as if in a cave but without the claustrophobia. We took photographs of one another and ate our sack lunch, talked of Barb’s family and growing up in this flat dry country. Then we started the long trek home, back through the gates that had to be opened then closed behind us, back along dirt roads with no names, back toward the and , our lives.
Posted by Russell at 12:09 PM 1 comment: