Thanks to the Atomic Bomb there was a uranium mining boom in Colorado in the 1950s. Until that time uranium had little value on the market, but after, was highly sought in postWWII United States, gearing up for the Cold War. All over the west there were mom and pop prospectors, lone miners hoping to strike a rich vein, and large mining companies whose exploration engineers used topo maps, Geiger counters, and skilled miners to find evidence of uranium deposits. My dad, Joe Uknavage, was one of those skilled miners, a southern Illinois coal miner who caught wind of good jobs to be had in western Colorado and made his big decision to go out west. 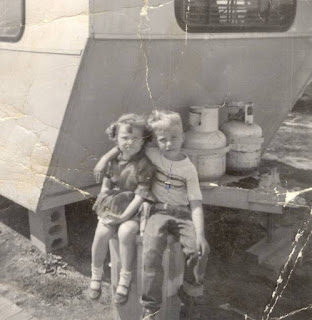 Sometime in 1954 he packed his seabag, kissed his pregnant wife and three little kids goodbye, and drove out to Colorado with fellow midwest coal miner, Joe Gieser. Hired on by Pete Loncar, superintendent of exploration for Newmont Mining, they set up camp in Hot Sulphur Springs, Colorado. Outfitted with a small trailer for sleeping and a few tools for digging, they spent the winter together searching unsuccessfully for a sizeable uranium deposit.

Pete must have liked their work for he hired them for a job in Washington State, mining uranium on the Spokane Indian Reservation at Wellpinit. They drove back to Illinois in the spring of 1955 gathered up their families and moved to Wellpinit, Washington. 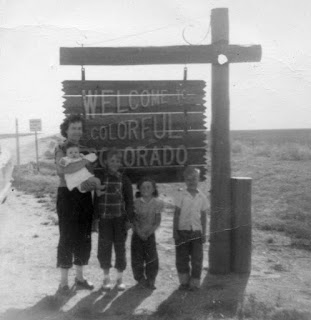 My dad was a great storyteller and to prepare us for the move he regaled us with stories of the wild west, cowboys and Indians, wild animals roaming the land. Somewhere included in those stories were tidbits about his winter just outside Hot Sulphur Springs. He told us it was the coldest winter he’d ever spent anywhere. He didn’t seem to be very fond of Joe Gieser, and their accommodations barely adequate, perhaps water carried from a nearby creek, hopefully propane to warm the trailer on the coldest nights….I don’t remember those details. My brother remembers talk of blasting so they must have done more than simply run a Geiger counter over the ground. Dad only brought two photographs back from that adventure,  one showed his clothes spread across shrubs, drying in the sun. The other captures him washing dishes in the small trailer kitchen. 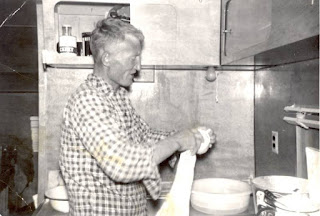 It undoubtedly was an exciting time for Dad, away from the daily cares of a family, beneath the clear blue skies of Colorado, “batching” like the sailor he had been just eight years earlier. He stayed in touch with Pete Loncar the rest of his life, exchanging Christmas cards each year. After my dad died the summer of 1996 I contacted Pete and learned a little more about their working relationship and friendship. Only after Pete died April of 2014 did I learn of his long career with Newmont, and the focus of his work, exploration.

Out of the blue, sixty years after that cold, lonely winter, my cousin Lisa Rich invited me to a family reunion in Granby, Colorado for June of 2015. A check of the map showed Hot Sulphur Springs a mere ten miles further west. How excited I was to finally visit this area and fuel my imagination about this short, adventurous time in my father’s life. Happily, both my brother and sister attended the reunion and my sister and I found an hour or so to visit the local museum, talk with a curator about the history of mining there, and drive to a nearby site known to have been a place of mining activity in the mid 50s. (I don’t know for certain this is the area where they parked their trailer and searched for ore, but the name Troublesome Creek popped up in my online searches for uranium exploration in 1954 near Hot Sulphur Springs, and I found a sign for Troublesome Creek.) 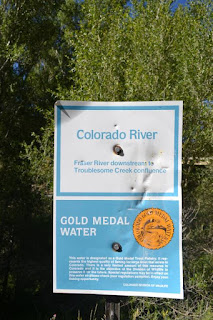 We walked Fran’s dog along a side road, took photographs, looked around at the mountains and river, soaked up the nature of the place. 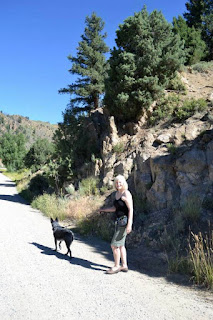 That’s all I needed to satisfy my curiosity about the area and what that winter must have been like. Dad visited the site several times over the next forty years as he too was drawn to return to places from his past, a longing he passed to all his children. 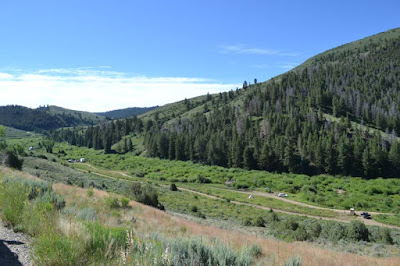 Posted by Russell at 1:30 PM No comments: