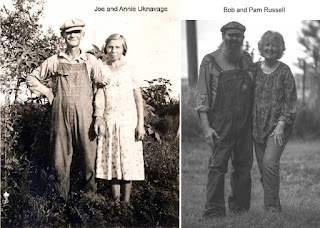 Dad told me his mother had a terrible temper and once chased him around the yard wielding a butcher knife with every intent of using it on him. Annie’s sister told me she was a small woman who worked hard all her life. I knew two of her brothers but never once asked them to tell me about my grandmother. That opportunity is lost. So, I am trying to learn about Grandma Annie, bring her to life in my mind, imagine her living with Joe and raising those three children in that little house. I have a few photographs that capture moments in her life. For those I am thankful. And I know that she lives in me, in my genetic makeup. To quote one of my favorite songs, “Grandma’s Song”, by Gail Davies, “and I pray that there is a little of her in me”. I’m pretty sure I got her temper. I’m glad we were both born in May. I’ll bet there’s more…how else to explain that our husbands wear the same overalls and hat?
Posted by Russell at 4:20 PM 2 comments: