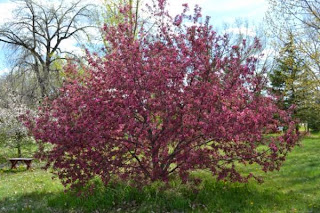 Spring is the best time, the showiest time, for the Jim Nance Tree, a flowering crab growing east and a little bit south of the house. I've numbered it #6 on the map of our three-acre place. Planted in 1994 this twenty-year old tree has bloomed every year and produces an abundance of bright red crab apples. 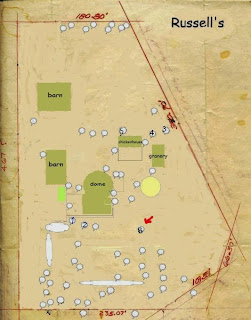 Bob first met Jim in the mid 70s when they were both students at Colorado Aerotech in Broomfield, CO, studying airframe and powerplant mechanics. A Texas boy, Jim was in the Air Force in the 60s, a B-52 bomber pilot in the Vietnam War while Bob, a Colorado native, was in the Navy with Underwater Demolition Team 11 in Vietnam. They became fast friends at Aerotech and graduated as the top two students in their class. One summer they made a driving trip together to the Experimental Aircraft Assoc. fly in at Oshkosh, Wisconsin then stopped in Iowa for an overnight stay with Jim's sister and her family...a great time for them both. Later Jim became the Larimer County Veterans Service Officer before trying his hand at politics. Jim's health was always an issue. He had a heart attack while in his 30s and had to step down from pilot to flight mechanic while still in the Air Force. Controlling his weight was a life-long struggle for he had a robust appetite and ate with gusto, like he did most things in his life, with gusto. At the time of his death Jim was about to embark on a big adventure, pulling his boat behind his pickup from Colorado to Texas where he and his new wife would launch the boat and sail the Caribbean. He checked into Poudre Valley Hospital to get checked out before the big trip and succumbed to a heart attack the morning he was to be released. Jim was a wonderful friend to the both of us so I bought a small flowering crab tree and planted it near the house so that each spring when it becomes the most beautiful tree on our place we think of Jim and remember him with love.
Posted by Russell at 5:49 PM No comments: