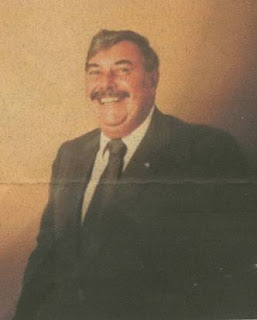 Just found out that Duane Johnson has died. He’s been failing for a long, long time. I hope he did not suffer in the end, but those with breathing problems, like Duane, often go down hard, suffocating slowly.

I first met Duane in 1971. My husband and I had recently separated and although he was moving back to Illinois he threatened to show up at our three-year-old son’s babysitter and whisk him away from me so I needed to hurriedly find a new sitter. Duane and his wife, Rosie, had an in-home childcare business and they were longtime friends of Bob Russell, my new boyfriend, so Rosie soon became our new daycare person. Rarely did I cross paths with Duane since he worked long days at Woodward Governor, hardly knew him. 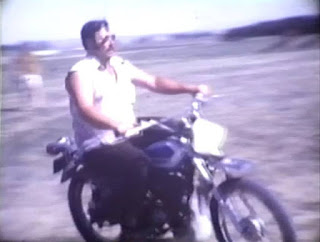 Back in the early 70s Wellington celebrated the paving of Main Street with an annual festival, the Well-o-rama, and one of the popular events was a motorcycle race, not so much a race as a series of short races staged on the school’s football field. Duane entered the races along with his two sons, Vic and Vince, and I have fond memories of watching them compete in the wacky motorcycle events, such as holding a spoon in your mouth with a raw egg in it, then trying to be the first to the finish line with the egg in place and unbroken. Duane was a big guy and there was no mistaking him out on the field, slowly motoring through the events, competing with guys half his age riding faster, louder bikes, having fun and acting like a big kid. That’s the Duane I like to remember.

Years later Duane and Rosie moved out here in the country, just down the road from us. Rosie drove a school bus then, Duane still worked at Woodward, and they added two more children to their family, years after Vic and Vince. We waved when we saw them but didn’t socialize. Then we heard through the grapevine that they divorced, and after that the rumors were never happy ones; we knew that life was difficult for Duane. I saw him at the grocery store several times, saw he carried an oxygen bottle with him, leaned on the cart for support. I recognized a sad person in those eyes, but he was always friendly, always stopped to talk. 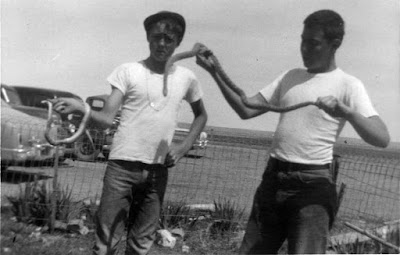 Bob first met Duane when they were in the seventh grade. The Russells had moved to Wellington in 1953 from Pierce, Colorado, over in Weld County, and the Johnsons arrived in the community about two years later, recently from the Wyoming oil fields, originally from Kansas. The two families became friends and Bob and Duane were thrown together at home as well as school and quickly became friends. They shared adventures the way farm boys do, hunting, fishing, and exploring the land. Duane had a younger brother, Maletus, usually it was the three of them out hunting and fishing and learning about life.

Duane and Maletus liked to fight with one another. It might start with a small disagreement, then progress to some shoving, but shortly punches were thrown, hard punches traded between brothers. If their father was within earshot he stormed in, grabbed them both, held one down with a knee while he flailed on the other, then traded kids. Bob remembers being in the middle of that scene more than once, shuffling out of the room to avoid the pandemonium.

Both the Johnson boys worked hard, a man’s work, from the time they were young teens, handing their wages over to their mother who controlled the family’s purse strings. She rewarded them with enough money to buy a car, every Wellington boy’s desire back then. Duane had a car, a girlfriend, and he was All Conference, All State Football offensive lineman in high school….life was good. He landed a much sought after job at Woodward Governor and worked there until he retired, over thirty years at the same job. Duane told Bob that when he retired there was a groove in the floor where he had stood in the same spot, doing the same work, for thirty-plus years.

Duane had four sisters, all younger than he and his brother. He is the first to depart this life and leaves behind a large family of nieces, nephews, grandchildren, all too young to have known the boy who liked to hunt with his friends, trade punches with his brother, play football with his team, and ride motorcycles in silly races. Duane Johnson was a good guy who had a hard life; I’m proud to have known him. Rest in peace, Duane, finally.
Posted by Russell at 4:50 PM No comments: