About thirty years ago I noticed that parodies of Grant Wood's 1930 painting American Gothic are everywhere! I started to collect newspaper clippings and magazine photos mostly but with the dawn of the internet more and more spoofs appeared. Most people in this country recognize Wood's painting and that must be the reason it is used so often to make a point about today's society. 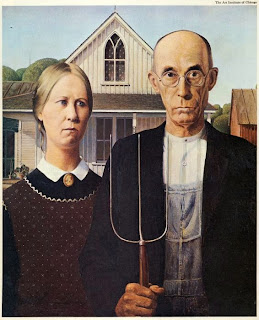 I must have fifty or sixty different takeoffs of this painting and they are delightful. I even had a potholder with an American Gothic image. I chose a few of my favorites to include in this blog.

This Spuds MacKenzie picture was printed with Spuds was in his heydey as an Anheuser Busch mascot, before he was banished for influencing children to like beer. 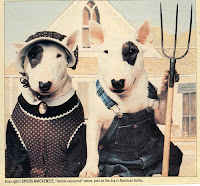 Time Magazine has featured this parody at least once...this issue came out in August of 1994. 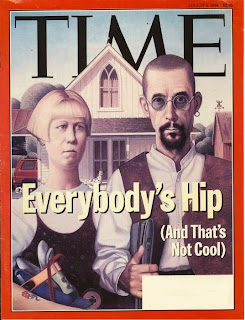 In December of 2008 a 25 foot tall sculpture of Wood's American Gothic was displayed in Chicago's Pioneer Court on Michigan Avenue and was very popular with camera-wielding tourists but by 2010 was dismantled and sent packing.

Oh, there are plenty of political uses for this image. In my collection I have Jimmy and Rosalie Carter from the cover of a Punch magazine, and the entire line up of candidates from the 1988 election. I chose this one of Bill and Hillary Clinton clipped from a Colorado newspaper "back when." 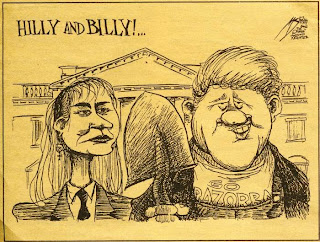 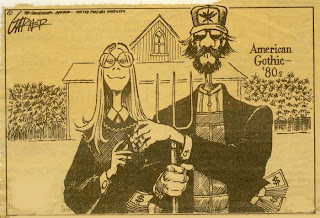 And since it is Thanksgiving I will post one of many images I've found where Thanksgiving is featured in an American Gothic parody. 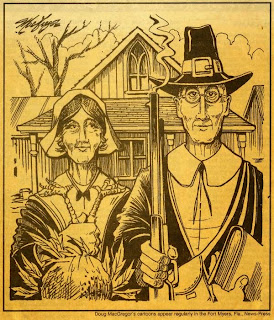 I even have a photograph of my dear brother-in-law, Ken Russell, and his wife, Charlotte, wearing coveralls and posing in front of one of his dad's farm buildings with the necessary pitchfork in his hand. But my favorite of all is this little drawing by a local first grade school boy..just love it. 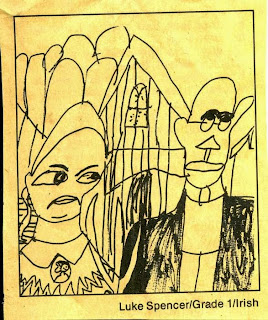 Next time you see one of these drawings or photographs you'll realize just how common they are.
Posted by Russell at 6:13 PM No comments: 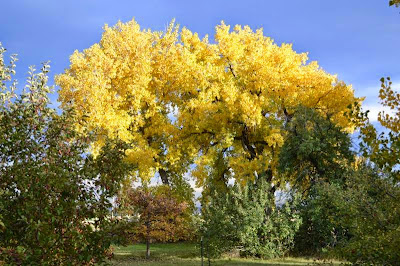 On the far southeast corner of our property are two old Cottonwood trees that are the first to show fall colors each year. As I return home from shopping in Wellington on Colorado State Highway 1, I see these trees from a long way off and sometimes as early as late August will notice a yellowing of the leaves, a sure sign that the season is morphing from summer to autumn. These two cottonwoods probably sprang up from the ground beside the irrigation ditch many years ago, much to the annoyance of the ditch riders and those water users downstream. When we bought our place back in 1972 the ditch was lined with stately cottonwoods all along its banks, continuing north as far as I could see, but our neighbor to the south, Dallas Horton, came by one day to tell me that he was going to have all but one of them removed as they impeded the operation of his walking sprinkler system. He apologized but said it was necessary. So these two old cottonwoods, and one north of our place, but not on our property, are the only survivors. I'm thankful for them for they provide refuge for crows, squirrels, and owls. I've never named these trees but think of them as the harbingers of fall.
Posted by Russell at 8:27 AM No comments: