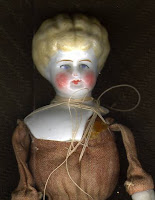 After I retired from my full time job I started frequenting a local auction house on Friday nights. At first I was cautious and conservative with my bidding and buying but then...oh, my. Some nights I'd get home at midnight and my car would be packed, front passenger seat, back seat, and trunk. It was great fun. Bob would wait up for me on those nights and help me unload my treasures. The plan was for me to sell those treasures on ebay and make a killing. Well, I certainly did sell a lot on ebay but when I entered my purchases and sales into an Excel worksheet I discovered that I was barely breaking even. But it was great entertainment and I believe those several years of auctions helped me make the transition from full time work to retirement...at least that's what I tell myself.

to recall even ten percent of those transactions. However, I remember the dolls. I started out buying old porcelain and bisque dolls about which I knew nothing so I spent hours online learning about them and figuring out how best to describe and sell them. This was back in the years 2000 to 2004 when ebay was more seller friendly. Collectibles sold quickly to people who had suddenly discovered the thrill of adding to their collections without having to traipse through flea markets or flit from garage sale to garage sale. 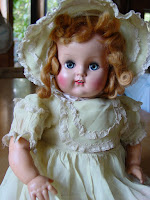 I added old composition dolls to my acquisitions and one night even bought a slew of Asian dolls from someone's personal collection. The "biggest" night I came home with several large boxes that filled my car with dolls that apparently came from the Goodwill or Salvation Army. That group had been picked over carefully and only the worst were sold at auction. I thought I could clean them up, find clothes, fix their hair....what was I thinking!

I sold the best, all the porcelain and bisque, all the old composition baby dolls and beautiful Asian dolls,and what I still have are all those boxes of end-of-the-line dolls. One day my husband had the bright idea to hang some of those worn out dolls from our old pear tree, sort of like Christmas ornaments in June. 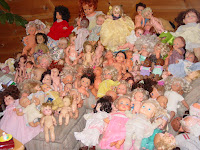 Within a week or so we were visited by a local sheriff's deputy who requested we take them down as people driving by were offended, or at least one person driving by was offended enough to call the sheriff and suggest there was something not right about hanging dolls from trees. That was the end of that!
In the four or five years when I was most active on ebay I must have sold over a hundred dolls. I'm including in this blog photographs of a few of my favorites.
Posted by Russell at 7:16 PM No comments: