With the encouragement and support of my husband whose amateur radio call sign is W0UDT, I passed my tests for the Technician and General licenses on January 17, 2015, and on the 22nd of that month my name and call sign appeared in the FCC database giving me the right to talk on the radio! I studied for about six weeks using the booklets published by the American Radio Relay League (ARRL) and took the test at the hamfest held at The Ranch near Loveland, Colorado. The hamfest is similar to a gunshow or flea market in that vendors set up tables to display their wares and interested buyers and  lookee loos walk along the rows of radios, antennas, and various related items shopping for bargains. I bought a small quilt from a woman who sat on a folding chair knitting and scowling. Traditionally, the hamfest offers the opportunity for non-hams to take the FCC tests in a room set aside for that purpose and on January 17 there was a good turnout of 27 test takers.


With the onset of the internet and cell phone ham radio operators were dying out until the FCC relaxed the rules in 2003 and declared it no longer necessary to pass a five-word-per-minute Morse Code (continuous wave or CW to hams) examination to get an amateur radio license. That part of the test was difficult for many and after the rule change the numbers of hams increased. Now the popularity of the "prepper movement" has increased the interest in ham radio even more. I decided to become a ham after a conversation with my husband, one of those conversations that couples who've been married almost fifty years sometimes have..."What will I do if I outlive you?" conversations. I told him that if I outlive him I'll want to stay right here and live alone but I might be scared and have to get a dog or a gun. He stared a me a long minute, then nodded, but didn't say a word. The next day he asked, "How about ham radio?" That sounded practical to me since he has erected several large antennas in the yard and has a hamshack with multiple radios, and I'm not good with dogs or guns. 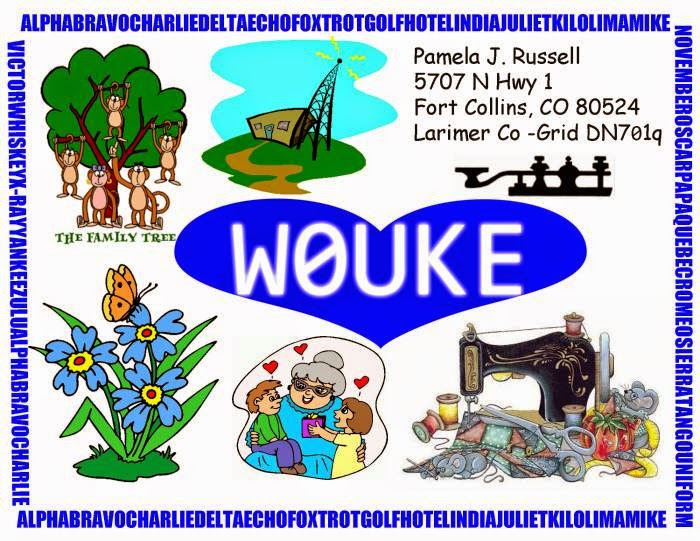 My first call sign was given to me by the FCC...they assign them in alphabetical order with a number in the middle that denotes the calling area in which the new ham lives. I got KE0CSY, or Kilo Echo Zero Charlie Sierra Yankee, in phonetic alphabet lingo. I decided right away that I would apply for a vanity license and chose W0UKE, partly because of its similarity to Bob's W0UDT and our friend Bill's W0WST, and partly because the UKE was my dad's nickname, and that of his brother too, as in Joe Uke and Bill Uke. I know they would be proud of me being a ham and I shared their difficult Lithuanian last name that was shortened to Uke.


So here I am, almost a month since I got my license, and I've only talked on the handheld Baofeng radio, on the 70 cm band, to my husband and to a fellow who is a regular on that band here locally. His call is KF0CB, nicknamed Charlie Brown. He is a WWII veteran who encourages us all, is always willing to talk, and serves as our base station of sorts.


There are many ways to enjoy ham radio and I'm just getting started. The basic use for amateur radio is emergency communication during times of disaster. It is also used for communication at events like bicycle races in the mountains. Some people are into contesting, such as contacting another ham in every state (WAS for Worked All States), or the highly competitive contacting as many radio stations as possible in a given time period. Others like to communicate with the Space Station and use satellites to get their signals around the world. I hope to learn Morse Code and use that format to communicate other CW users in foreign countries. That will take some study and practice. The thing I like the most about being a ham is sharing a hobby with my husband, a semi-technical hobby that allows each of us some individuality in our hobby.
Posted by Russell at 7:42 PM No comments: