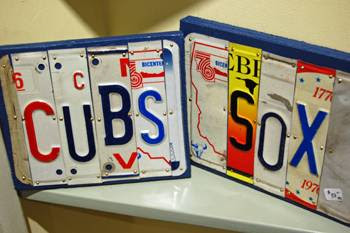 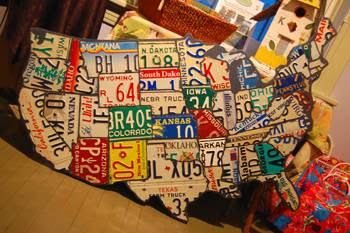 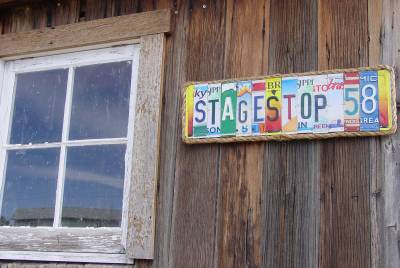 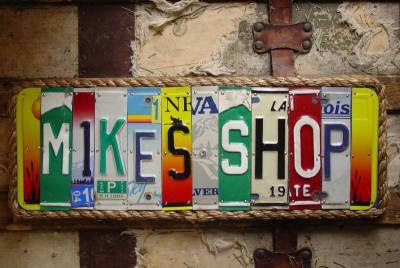 My longtime friends Pete and Cathy Safiran in Shipshewana, Indiana make colorful, fanciful signs using old license plates and the resulting signs are works of art. They will create custom signs like these two they made for me, "Stagestop 58" which is my ebay ID, and "Mike's Shop" which was a gift to my brother for his workroom, but most of their creations spring from their imaginations and are designed to appeal to a broad market. Before Mr. Obama was elected president they sold a lot of "Hope" and "Change" signs. And there are some cut into the shape of a state with individual plates designating the counties. They market these beauties in several ways: some are placed in retail outlets and art stores, others consigned to upscale shops in the Chicago area, and always for sale at Pete and Cathy's Flea Market booths in Shipshewana, IN and Kane County, IL. Just this month (October 5, 2010) one of their signs was featured in the Chicago Tribune in an article about Andersonville, IL.
They make great gifts and Christmas will be here soon so if you want to order one (or many) of these wonderful signs email Cathy Safiran. 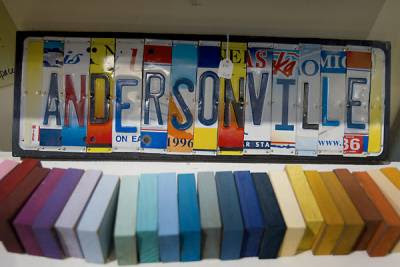 Posted by Russell at 9:19 PM No comments: 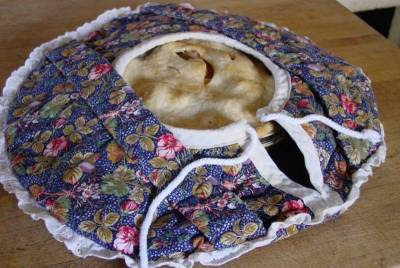 About 25 years ago a good friend of mine, Carol West, gave me a pie cozy. Carol was a beautician at that time and each Christmas her ladies brought in gifts for their favorite hairdresser. From one of these sweet ladies Carol received a pretty little pie cozy and she gave it to me because I make pies and sometimes take them to parties. I had never seen a pie cozy and immediately loved it. I found another one months later at a thrift shop but it wasn't as pretty as the one Carol gave me. A couple years later my stepmom wrote to say that her sister-in-law was making crafts to sell and sent me a couple of those shelf-sitter wooden toys often found at craft sales. I responded by sending my stepmom my pie cozies on loan so that her sister-in-law could make patterns from them and create new cozies to sell with her other crafts. I sent a letter in the package asking for the cozies back when they were finished making patterns. Years went by. A couple of times I asked about the cozies but never got a response to my question so I decided to drop the subject rather than hurt someone's feelings. My stepmom died last year and when I visited her brother and sister a few months later they gave me the cozies, still in the box I mailed them in and with my letter requesting their return right on top. I was thrilled to get them back and am using them both in my kitchen again.
Posted by Russell at 4:21 PM No comments: