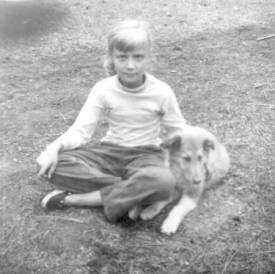 By Christmas of 1955 we had moved on to the state of Idaho where we lived in a motor hotel in the town of Salmon. My most vivid memory of that school was the cactus that grew in the schoolyard. Across from the school was a ramshackle collection of lean-tos where, I was told, the Indians now lived. I vaguely remember attending an Indian dance held at night where dust rose from the dancers' feet and we ate corn on the cob.
When school was out in May of 1956 we moved up into the mountains to the mining town of Cobalt where we lived for the next three years. I could write volumes about those years for the memories are vivid and many. We moved back to Illinois when the mine shut down and Dad had to find other work. For the next twelve years I lived in the midwest but dreamed of the west I had come to love.
In July of 1970 I convinced my husband to pull up stakes and head west, destination Boulder, Colorado. In retrospect I know I was trying to find happiness and hoped it still lived in the west I had known in the 50s. It worked, for me, if not for him. I'm still out here, living in Colorado with a new husband, a man who grew up in the west and loves is as much as I do. Two of my best friends started life in little towns on the Wyoming plains, Big Piney and Lander. Most of my other friends are native Coloradoans whose childhood memories are stories I love to hear. This is home now and I'll never leave, but there is a part of me that longs for the dark, fertile soil of my native Illinois, for the ripe smell of fall in a hardwood forest, and for springs of warm rain and no wind.
Posted by Russell at 8:51 AM