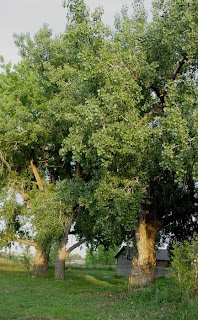 
Our old cottonwoods have always been popular with crows and squirrels and they now support a swing for the grandkids and provide shade for summer parties. But we know better than to camp beneath them when the wind blows for those heavy branches sometimes let go with no warning and crash to the ground below. I hope they live past their average lifespan of eighty years for that is approaching soon just as I am fast approaching mine.
Posted by Russell at 4:26 PM