My Mother-in-Law Frances, On Mother's Day

My mother-in-law, Frances Russell, came into my life when I was twenty-four years old, and for the next twenty years she was a strong influence in my life. I was here in Colorado where Frances lived, married to her younger son, while my own mother was two thousand miles away in Illinois. No cell phones then and long distance calls were expensive so my mother and I communicated with handwritten letters and saved phone calls for emergencies. Once a year Mom and my step-father came out to visit us, and then, with no warning, my mother died when I was twenty-nine. I was heart broken. 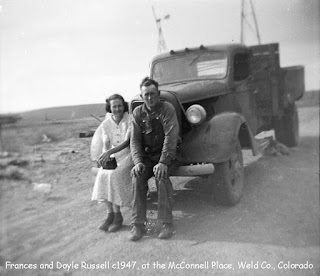 No one can replace your mother. Frances knew that. She lost her own mother when she was just six weeks old and lived with her grandparents until her grandpa was murdered out in the harsh, desolate country of northwestern Colorado where her family was desperately trying to homestead and prove up on their claim. After that tragedy Frances’s grandmother was in no shape to raise a little granddaughter. Fortunately, at three years of age Frances was blessed with a step-mother, Cloe Callender Jones, a gentle, kind woman who married Tom Smith and stepped in to mother his four high-spirited children, while bringing into the marriage a son of her own. With the patience of Job, Cloe mothered those children, taught them, fed them, and loved them. Her influence on Frances was life-changing. 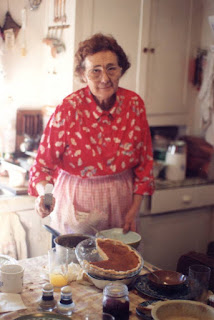 Frances Russell was very different from my own mother. Whereas Mom was quiet and passive Frances was theatrical and lively. She was already fifty-three years old when I met her but I’ve read several of her diaries written in the 40s and 50s and know Frances has always been full of energy, accomplishing more each day than I get done in a week. She was a dryland farmer’s wife with four children, living in a drafty house with no electricity or running water. She worked in the fields, cooked three meals each day, sewed clothes for her children, and helped raise the livestock.  Late in life she went back to school to get her GED diploma because she regretted not graduating from high school. She also enrolled in beauty school and became a licensed beautician.

By the time I came on the scene Frances was quilting, gardening, giving hair cuts and permanents in her kitchen, raising chickens, baking wedding cakes for brides in the Wellington area, and so much more. For every holiday and birthday she invited us all up to her small home and graced us with large, delicious meals and sent us home with extra pie. When a local family experienced a hardship or tragedy Frances took them a batch of homemade donuts and shared their sorrow. When I married her son Bobby in 1972 she made my wedding dress. Frances belonged to the Rebekah’s Lodge, worked as a cook at the Y-Knot Café in Wellington, and traveled back to Boston once a year to spend time with her older son and his two boys. She wrote her autobiography by hand, and when her older son complained that she “left out the good stuff”, she sat down and wrote it again! She never slowed down. 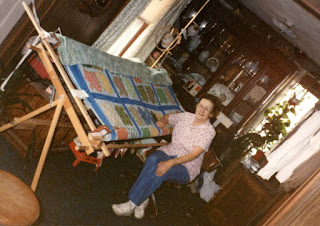 One thing Frances and I had in common was our love of family photographs. She had a little box camera most of her married life and because film and developing were expensive she mostly photographed special occasions, grouping as many people into a photo as possible. I treasure her photographs.

We both loved quilts and quilting too. She kept a quilting frame set up in her living room most of the time and made dozens of lovely, full-sized quilts which she generously gave away to each member of her family and many of her friends too.

Frances’s heart started to fail her in 1989 when she was the age I am now, seventy-one. We didn’t realize what was happening to her. On a trip back east, visiting her older son, she had an attack of angina but blamed it on the onions she had eaten with dinner. And when she returned home and experienced congestion in her lungs she blamed it on the soot in the house caused by they wood-burning stove in the living room. Her fatal heart attack occurred in the hospital but it was severe and they couldn’t save her. 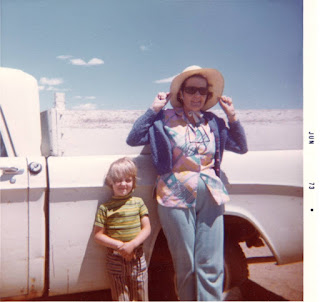 Frances was the heart of our family. She was the energy that encouraged our gathering together to celebrate birthdays and holidays. She was the glue that kept us communicating with one another. Her loss was dramatic and frightful. Doyle seemed smaller, like a balloon that has lost most of its air. Her home was too quiet. There were no warm smells of chicken and noodles coming from the kitchen. Only after she left us did each of us realize how much she meant to us.

My mother-in-law, Jennie Frances Smith Russell, was an authentic Colorado woman…colorful, irreverent, energetic and theatrical. She was my son’s grandmother, the only one he really remembers. I am very fortunate that she took me under her wing, like a setting hen who finds a stray chick and pulls it close. I love you, Frances, and I wish I had told you so.