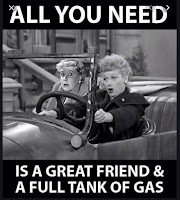 You know the kind of friend who is ready to go with you on any kind of crazy adventure you come up with, says "let's do it!" rather than, "Uh, I'm not sure"? I have a friend like that in Marilyn Hodges. We've been friends for over forty years but it wasn't until I saw a meme on facebook with Lucy and Ethel that I realized, "Yes! I have a friend like that." I want Marilyn to know I appreciate this special friendship, appreciate her.
As I reflect on the fun times we've shared I've most enjoyed the outdoor adventures. Like the time we went to an abandoned farm outside Cheyenne, Wyoming, for a guided tour of the trees and shrubs that have survived decades of neglect. Not exactly a trip to Disneyland, but not as boring as it sounds. Marilyn and I both live out in the country where we grow trees and shrubs. We know the challenge of planting species that will grow in our dense clay soil, ever present wind, and scant rainfall. 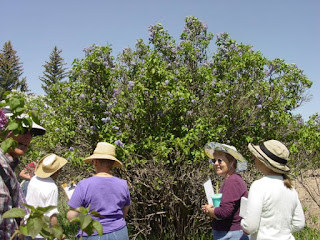 This property in Wyoming was an experimental range station, planted and maintained by the U.S Department of Agriculture until it was abandoned in the 1930s for lack of funding. For the past ninety years some of the trees and shrubs on that property have survived without any help from man. Our guide that day, Scott Skogerboe, a Fort Collins nurseryman who so loves trees that he tracked down the last known descendent of Johnny Appleseed's trees (he tracked down the tree, not the person), cloned it, grew trees from the clones, then sold them to tree enthusiast across the nation. I blogged about Scott Skogerboe  years ago. When you have a guide with Scott's knowledge and enthusiasm, a fieldtrip to a weed-filled property west of Cheyenne is exciting. 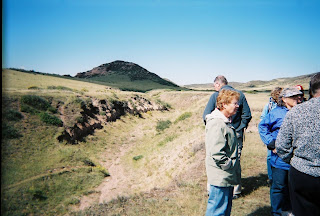 And then there was the time we participated in a guided tour of Soapstone Prairie Natural Area prior to its grand opening to the general public. This time our guide was Dr. Jason LaBelle, an archaelogist at CSU with a special interest in the Native Americans of our area. As with Scott Scoberboe, Dr. LaBelle's enthusiasm for his subject and depth of knowledge of the prairie that is now Soapstone made this field trip thrilling for me. Thanks to my husband's decades long, in-depth study of the Lindemeier Folsom archaelogical site, discovered in 1924 and located within Soapstone, and Bob's sharing much of his knowledge of this remarkable, 12,000 year old site with me, my enjoyment of LaBelle's presentation was magnified. 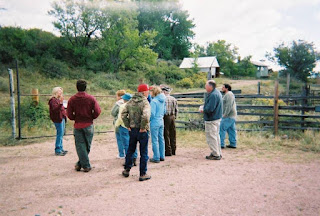 Our tour that day moved from the Lindenmeier site eastward to the location of remnants of cabins and old homesteads slowly deteriorating in the wind and harsh sunlight. I knew a little about the Bear brothers who homesteaded up there, short in stature, but stout men who adjusted their surroundings to fit their needs. Apparently, they baled hay in smaller bales than was normal and their neighbors joked about the little Bear boy bales of hay, difficult to stack but easier to use. We had limited access to the homestead sites for they were protected by fences, as they should be. 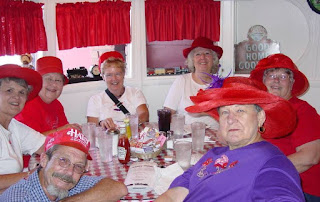 Marilyn and I have several mutual friends, all from Wellington, Colorado, who love to get together for lunch. At one time we even had our own Red Hat Society chapter. During those years we ventured out to Menopause the Musical, the Molly Brown House in Denver, the Cheyenne Botanical Gardens, and more. But that got to be "old hat", pardon my pun, so we put those red hats away and continue to meet for birthdays, music, and lunch, always fun to have lunch.

My lifelong friend Cathy Safiran introduced me to a new author, through his writings, of course, not in person. Months later she told me he was coming to Denver, to the Tattered Cover Bookstore, one of my favorites, and that I would have the opportunity to meet Luis Urrea in person, March 24, 2018! How exciting was that! 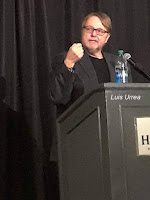 I first read "The Hummingbird's Daughter" and so enjoyed it, followed with "The Devil's Highway" and "Into the Beautiful North". By then I was hooked and wanted to read all that Luis had written and eager to meet him, for Cathy had told me that his booksignings were so much more than standard booksignings where the author sits at a table with a stack of books, looks up at the person standing in front of him long enough to ask how to sign the book, then looks back down while quickly signing his name. There is that process at the end of the evening but before that Luis Urrea takes his place on a podium in front of an adoring audience and entertains with stories and confessions punctuated with outbursts of exclamations only understood by the Spanish speaking members of the audience. By the time he wraps up his presentation we all feel close to this man, a part of his family, and he a part of ours. But I digress. This is about Marilyn, and yes, she went with me and so did two other of our book-loving friends, Carol and Leta. And when Luis came to Fort Collins in 2019 Marilyn joined me at his booksigning for "The House of Broken Angels". 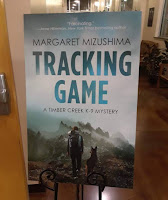 Most recently we got to meet our neighbor and acclaimed author Margaret Mizuchima at the Northside Aztlan Center in Fort Collins. Margaret has written five great novels in her "Timber Creek K-9 Mystery" series and we were there for the signing of her latest "Tracking Game". I call Margaret our neighbor because she lives with her husband and dogs just west of Wellington. Anybody that close is a neighbor. I love that when Marilyn realized she was going to meet Margaret she bought her books and read them prior to the signing, making that event more meaningful to her, and supporting Margaret in her career.

Thank you, Marilyn, for these fun times, educational adventures, shared memories. I don't walk as far or as fast as I use to so that hike we were going to take along the trail at Cathy Fromme Prairie Natural Area might not happen. But I would love to visit your hometown, Lander, Wyoming, some day. The Wind River Reservation is a place I'd like to see, not only because you grew up near there but because another of my favorite authors, Margaret Coel, has written some great books that take place on the reservation. I wonder if Margaret ever has booksignings in Lander? Wouldn't that be a fun adventure? And the Colorado Native Plant Society has outings, field trips where small growths of rare native plants are protected and studied. And do you know about the Stone Age Fair sponsored by the Loveland Archealogical Society? Ahhh...so much yet to see and do as we grow older and wider. No! wiser, I meant wiser.
Posted by Russell at 2:38 PM