Hallstadt, Germany Was a Long Way From Home 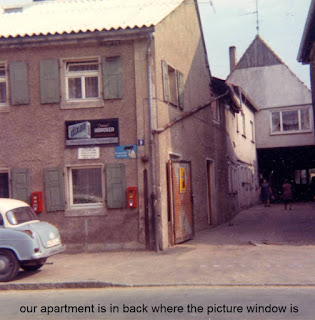 An Internet search today produced an unexpected result and like a time machine instantly transported me back to Hallstadt, Germany, New Year's Eve 1967.  I was married to an Army PFC, living on the economy (off base), renting an apartment from the Josef Horcher family. My husband and I had put the twins to bed, two little girls we were hoping to adopt, having gained custody of them just five months prior, when there was a knock at our door. Cautiously, we opened it to find our landlady's twenty-one-year-old son standing there, holding a bottle of liquor, smiling. We invited him inside with a sweep of an arm and the three of us sat down to our small kitchen table. Rainer was a handsome young man, a professional soccer player, and he was deaf. His mother had told me about Rainer, and it was he who drove us to the orphanage when we first met the twins, but other than that we didn't know him, couldn't talk with him because of our limited German language skills and his inability to hear. So, his appearance at our on New Year's Eve was a surprise. 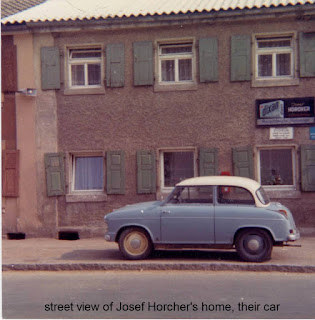 From our kitchen table we looked out a large window high above the Horcher family's courtyard. Sitting there in low light so that the sky and stars were visible to us we shared Rainer's liquor in silence, nodding, smiling, clinking glasses together in a toast to the New Year. Apparently Rainer's mother, Doris, has told him our good news, that we had just found out that I was pregnant, for he reached toward me with his glass, extended it over my belly with a shy smile, then raised it again so we could once again touch glasses before drinking. Rainer didn't stay long, stood, shook our hands, smiled and walked out of our apartment and out of our lives. I never saw him again that I recall. But I never forgot him, the kindness he showed us, a lonely American couple far from home on New Year's Eve. 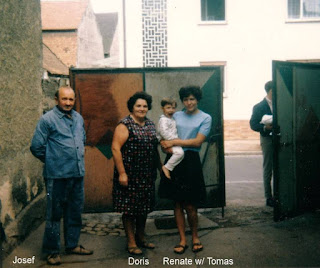 Tonight I googled Hallstadt near Bamberg plus Horcher, hoping to find a photograph of the Josef Horcher home at Mainstrasse 9, their street address. Instead my search found a death notice for Rainer. He died this past summer at age 73. I translated enough of the information to learn he worked for the town of Hallstadt for many years, was well respected by his employer, and mourned by two sons and two daughters. There was also a mention of his sister Renate whom I remember fondly.

And there is more to this story, like most stories. Rainer's mother, Doris, confided this to me over coffee and kuchen, that when Josef was gone off to war she, like many of her friends and neighbors, struggled to survive and feed her family. Near their home in Hallstadt was an American Army encampment, probably a supply camp of African American soldiers. (I came to that conclusion after some research years later). They had flour, sugar, and other provisions so badly needed by the mothers like Doris in war torn Bavaria. So she traded what she had for groceries and found herself pregnant. When her son was born she planned to place him in an orphanage but before that took place Doris was told that Rainer was born deaf. She didn't think that anyone would adopt a deaf, black child so she kept him, and when Josef returned home she told him the truth. Josef accepted Rainer as his own and did not blame Doris for her survival decision. When I read today that Rainer stayed in Hallstadt, worked for the town, married and raised a family, probably inherited Josef's home and business, and died there, my heart swelled with love for the Horcher family, every one of them. And I remembered how good they were to me and my family, encouraged me to call them Opa and Oma, tried to teach me their ways. God bless you, Rainer, and those four children you brought into this world. And thank you Josef and Doris for a beautiful lesson about life and love.
Posted by Russell at 12:37 AM