Building the Dome, the Entryway - 7 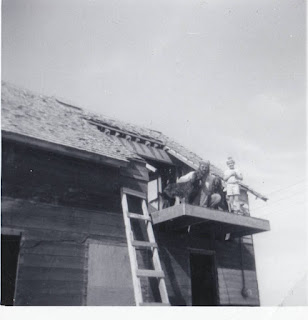 There were two more framing projects that Bob undertook prior to shingling the dome and those were the construction of the dormer in the upstairs bedroom of the old house and design and building of an entryway to the dome. 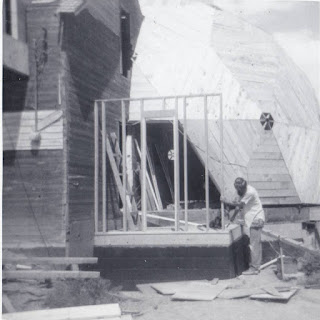 The dormer was complicated. First Bob cut a seven foot wide opening in the southfacing roof of the old house. He extended the floor joists out another three feet, then built a twelve foot wall at the end of those joists. The side walls and roof were sloped, twelve foot at their tallest then framed to meet the old roof line. What we ended up with was a lot of light in that master bedroom for he put two french doors on the south wall and narrow fixed windows on the sloped walls. We grow plants there now, year 'round. I call that area the-stick-em-out. 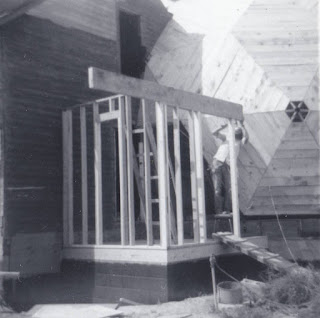 The entryway was a challenge for Bob as he had to build a heavy beam and set it in place above the doorway. I was worse than no help, mostly offering unwanted advice, cautioning him to be careful, that sort of thing. One day I was standing below when a 2x8 got away from him and instead of stepping out of the way I tried to catch it. It glanced off my hip and left me sore a few days but mostly convinced both of us I didn't have good sense on jobsites. That is the only accident I recall throughout construction of the dome. Bob always enjoyed working with Bill West. They seemed to be able to read one another's minds and intentions. So we and I had a private joke between us when our working together just didn't work. I would say, "Yeah, yeah, I know, if Bill West were here...." 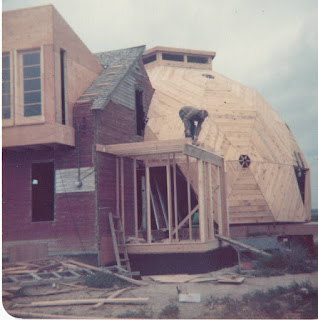 The entryway was built so that its floor is one step down from the floor of the dome. It had a flattop roof on it which for years served as a deck off the master bedroom upstairs in the old house. Because it was flat it didn't drain well so years later Bob built another roof over the entry that sloped and drained well. We quit using it as a deck but it is still a good access route when he needs to go up on the dome roof. 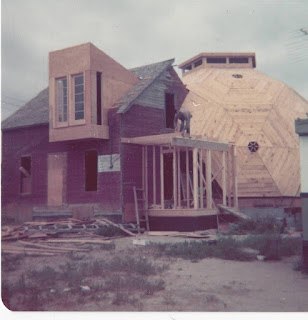