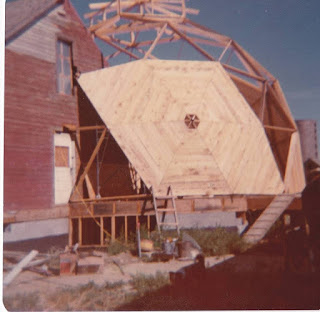 Plywood applied over the struts would have given the dome more rigidity and provide a solid base for the application of shingles but plywood was expensive, wasteful, and heavy.It would have required two men to lift in place and nail down. Bob opted to sheath the dome in 1x6 pine boards instead, a decision he would change if he could go back and do it again. He made 2 jigs or patterns out of 1x4 boards that he would use over and over again to precut the 1x6 boards to length before nailing them over the triangles. The dome is made up of just two different sized triangles, hence the need for two jigs. On the floor he would lay out some 1x6's of appropriate lengths, tails wild, then put the pattern on top of those, run his skill saw along the edges of the pattern cutting the 1x6's beneath. 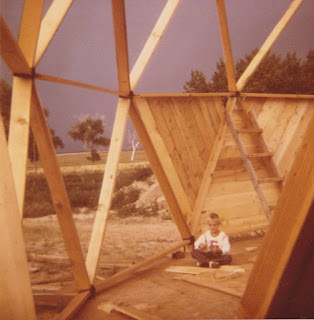 He could have beveled the ends of each 1x6 but that would have been so tedious and unnecessary. Gathering up the pile of newly cut 1x6's Bob nailed them in place with hammer and nails, one triangle at a time. He started on the bottom row and worked his way around the dome. I loved the effect, the beauty of the wood, the geometric designs and wished we could live it in just like that, without insulation or drywall or even shingles. It was so beautiful.

Early on in this construction project we rented scaffolding from a local rental agency, three layers each about 6' tall. Hindsight being what it is we would have been money ahead to buy the scaffolding for we rented it for years! Erected inside the framework of the dome Bob used it for framing, sheeting, insulating, and drywall. 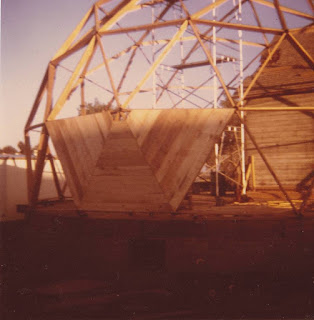 He did all the sheathing by himself and says it went fast and without incident. As the structure took form many people drove up to see what we were building. Some stopped just long enough to take photographs, others wanted to chat. I loved this phase of construction for that fresh cut pine had a scent so clean and sharp that it made me happy just to breathe it in. And the lines and angles of those triangles soon created hexagons and pentagons...magical.

Although the dome was far from rainproof, we set up a table and chairs inside and entertained people. I found one grainy black and white photo of someone opening a bottle of champagne while seated at that table. Everyone watched the cork fly high into the air. 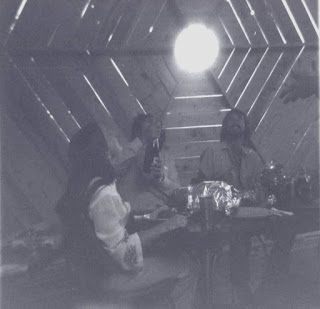 Along with making new friends and celebrating with old friends, my family came to visit from Illinois. First was my brother drove out in 1973. Mike helped us dismantle the old chicken house, drank Boone's Farm wine with us, talked about music and reminisced with me about our childhood. I was happy that he and Bob hit it off and had lots to talk about.  My sister Fran drove out from Illinois with a friend and she and Lana sunbathed on the concrete slab that use to be the porch of the old house, now located about 20 feet away and in full sun. Oh, the sunburns they got! Doyle fixed them up with one of his homemade potions and they healed slowly but surely. 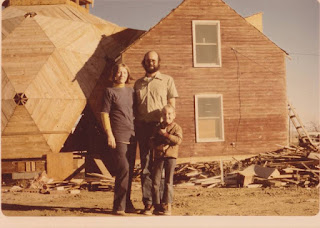 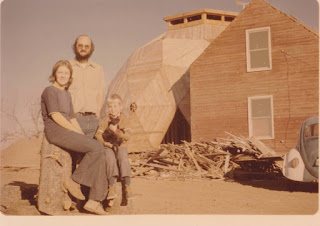 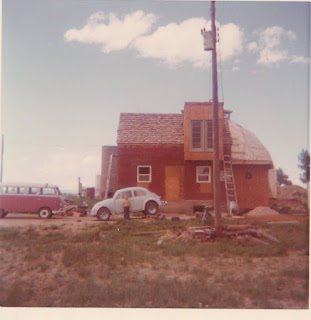 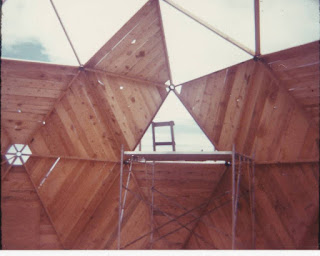 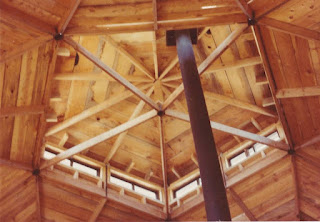 My favorite photo of this phase of construction. That cupola Bob made was gorgeous with its intricate design, operable windows all around letting in fresh air. We imagined a big swing hanging from the center hub, like the swing in the Debbie Reynolds movie, or was that Doris Day? Wait, I think it was "The Girl in the Red Velvel Swing" with Joan Collins! The closest we came to realizing that dream was the day Bill West swung from a rope Bob had tied to the struts and managed to walk up the sidewalls, higher and higher with each swing. That must have happened before the stovepipe went in.
Posted by Russell at 12:36 PM