Building the Dome, Those Who Helped Build It - 9 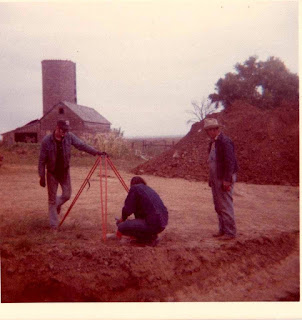 Throughout the building of the dome and remodel of the old farm house, Bob had good help from family, friends and local tradesmen. I've mentioned Doyle and Frances placing those support beams under the house, and Lee Tucker and Mr. Beckstead digging the basement. Lloyd Vlcek laid block walls under the house and the dome. And Dave the college student who nailed on shakes while standing high in the air on a scaffold plank. 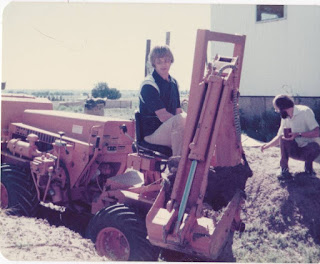 Bill West dug trenches and built dome walls early on, and over the years contributed so much more from electrical outlets to handrails. 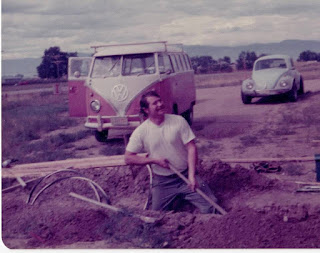 Mike and Jim were brothers-in-law who rewired the old house and the new dome. 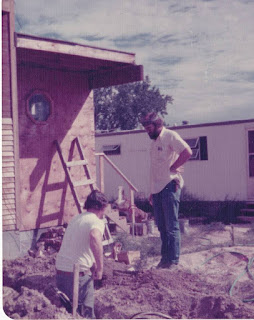 If I recall correctly, at the same time they were working for us they were starting a plant nursery business in Fort Collins, Gulley Greenhouse. 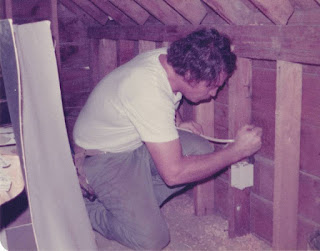 I so well remember the day I took that photo of Mike putting in an electrical box in the upstairs bedroom. He didn't know I was there with my camera and when my flash went off he jumped a foot! Although he knew for certain there was no hot wire in that box, the flash caused quite a reaction. Sorry Mike. Love the photo though. 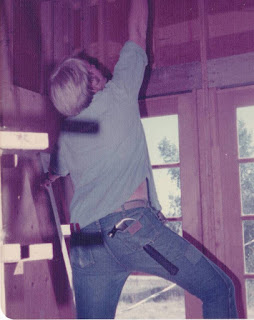 I should mention that we initially we took out a building permit for a remodel but as soon as the dome appeared, large and looming over the small farm house, we got red-tagged and told to cease construction until we "got things straightened out" with the Larimer County Building Department. That was a scare! But it ended well when we agreed our project was an addition rather than a remodel, paid the extra fees, and got the green light to continue building. 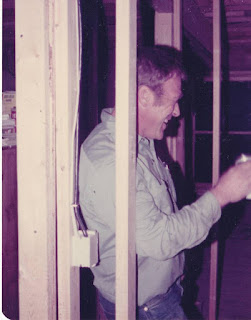 Hershel "Dutch" Schnug was a professional plumber and an old family friend. 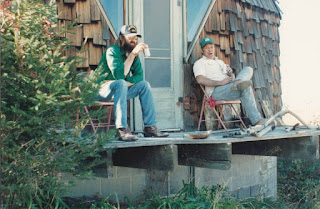 He stayed around to drink a beer with Bob on the east facing deck. We hired another plumber from Wellington to install our hot water heat boiler. I don't remember his name but he married one of the Hottam girls. 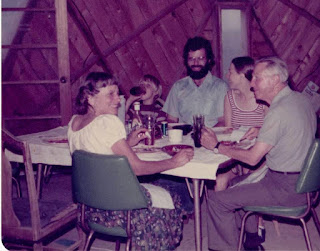 John Messineo, the photographer, brought his wife and his wife's parents out to visit. We had lunch beneath the newly built dome structure. 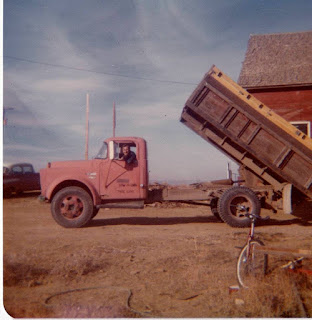 I know I have forgotten, or didn't photograph, several other people who worked with Bob in the early stages of construction. Later, when we get inside and he insulates, drywalls, builds cabinets, and on and on, there will be more stories to tell, more people to thank. All those tradesmen I've mentioned did great work. Really conscientious, skilled craftsmen. Thank you, guys, for helping make our dream a reality.
Posted by Russell at 11:17 AM