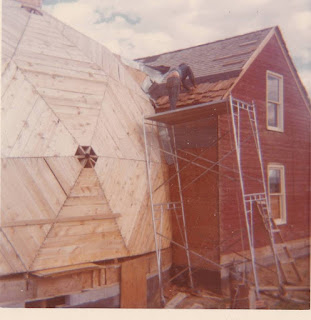 I have totally missed addressing the subject of windows. Sometime after the 1x6 pine was nailed to the struts and before the shingles went on, Bob put in windows, not only in the dome but in the old house as well. Three of the windows he put in the dome were premade Marvin Windows, small single-hung wood windows that we purchased from Union Mfg. And two of the windows that went into the old house, both on the west walls, one in the upstairs bedroom and one in the bedroom on the first floor, Patrick's room, were large double-hung wood Marvin Windows. Those were relatively easy to frame in. But Bob custom built five triangular windows for the dome and one tall, narrow rectangular window in the dome wall near the entryway. None of these custom windows open, all fixed in their frames. 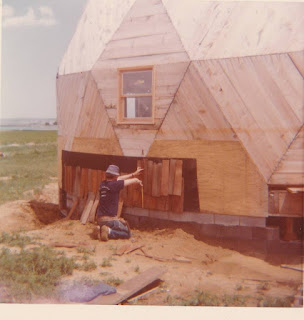 One pair of the triagular windows was high in the living room right above the deck. The other pair of triangular windows was in the second floor on the northwest side in the room we refer to as Bob's office. The fifth triangular window was a small one in the downstairs bathroom. He made the frames out of 2x6's and used clear plexiglass in the openings. I don't have any photos of this window project and frankly, don't remember much about it. 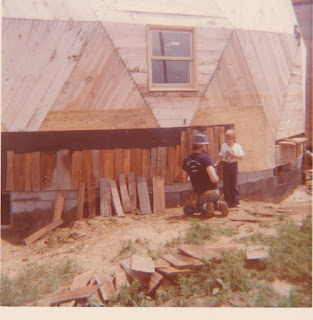 When it came time to shingle the old house and the dome I don't believe we ever considered any other roof covering than 3/4"-5/4" heavy butt handsplit cedar shakes. They were quite popular with local builders in the 1970s and Bob's association with homebuilder Carl Nelson had him designing and drawing house plans for many homes that specified heavy cedar shakes. 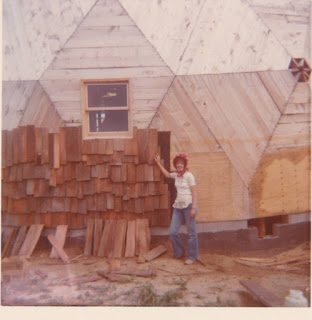 Unfortunately, they were about twice the price of asphalt shingles, but we got lucky. Our employer, Union Manufacturing, sold a lot of shake shingles and there was often a pile of loose shingles near the full bundles. Some had been returned from job sites but most were set aside when a bundle broke open accidentally by a fork truck handler. During yard clean up we were allowed to buy the loose shakes at a reduced price, and that we did, stockpiling them at home until we had enough to cover the dome. 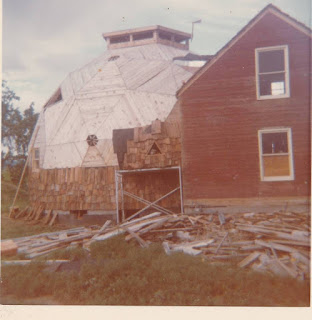 Before the shakes could be applied Bob connected the dome to the foundation by nailing a 4' high skirting of 1/2" plywood all the way around. That was necessary because the dome only touched the floor where the steel hubs rested. The plywood insured a tight bond between the walls and the foundation, no air leaks around the floor, and a good nailing surface for the shakes.
As he began to shingle he first nailed up 36", 15# roofing felt over the area he planned to shingle that day. He started on the far southwest corner of the dome at the foundation and nailed on a row of cedar starter shingles. 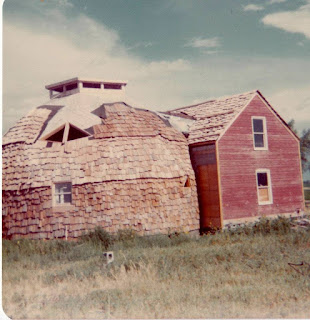 Then one by one he selected and nailed each shake in place using roofing nails and his trusty hammer, the one he used when he framed houses for Bartran Homes. Between each layer of shakes he put 18" 30# felt, standard application for shake shingles at that time. 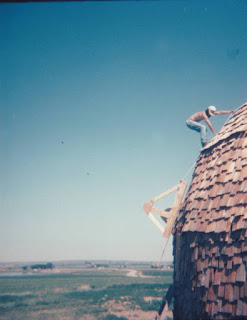 Bob did most of the shingling himself but at one point he hired a young college student named Dave to help him. He built a moveable scaffold secured by ropes and while Dave stood on the scaffold plank Bob hoisted buckets of shingles up to him in a five gallon bucket. 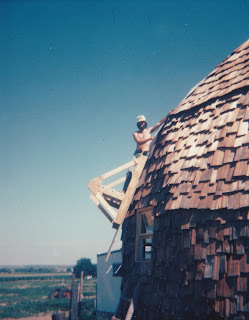 Now when we look at the two photos we took of Dave on the roof we realize we were asking a lot of him to work up there with no safety harness. We just never thought of it. 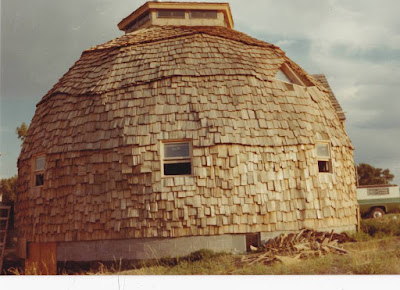